I will be using the Fern WiFi Cracker open source wireless security tool included in the Kali Linux and Backtrack 5 r3 security distros. Before attempting to use Fern or any other utility in Kali or Backtrack please make sure to read the mozilla firefox version 9 download and MAN pages for a complete description of the program options and switches. This demo is for wireless pentesting educational purposes and to emphasize the insecurities of using a weak or common dictionary word for wireless network wfii and encryption security key or passphrase. Fern basically takes the command line utilities to crack these networks and puts them in a GUI. Very simple to use… scary easy! Fern also provides some extra functionality for hijacking sessions and locating a computers geolocation via its Mac address, but I have not tested with these features.

You can set the channel option to scan a single channel or leave it at the default All Channels. One nice feature downllad to check the Enable XTerms option which will have Fern open up the Terminal windows during its usage to see what the program is doing donload the background. Click OK when done. The top part of the WPA Scan Terminal window shows the networks being found, and the lower part shows any connected client devices.

For a WPA attack to work it requires a connected client. The most important part of the attack will kick the client off the wireless network and capture the 4-way handshake when the client device re-authenticates to the network. If the network you want to pentest has no connected client your out of luck! I have been seeing less and less WEP enabled networks, so that is a good thing! You can read more about Reaver by clicking here.

Fern will start the attack and on the left side of the screen the attack steps will turn yellow as Fern works through the various steps. The most important step is capturing the 4-way handshake and Fern will open an aireplay-ng Terminal window showing the progress of deauthentication if XTerms is checked in the preferences of the connected client.

Once Fern has captured the handshake it will start the bruteforce attack. If the WPA key is in the wordlist being used it will display the found key in Red. As I mentioned I setup a passphrase I knew would be found quickly, and from start to finish this attack took under 4 minutes! The Fern utility is free to download and simple to use, and not everyone is going to use it for legit wireless cracked purposes. With possession of the WPA key a person can associate to network and have a wordlits to the internet, or they crac,er launch other attacks.

For example, with possession of the WPA key the attack could be expanded to include decryption of the data traffic of the legitimate clients on the wireless network.

You are commenting using your WordPress. It uses dictionary attacks, distributed network attacks and other methods to guess WEP Keys. WepDecrypt requires installing some libraries and making the binaries executable. For this reason, the tool may not be a good choice for novice users. CloudCracker leverages cloud-based resources to crack WPA keys and other types of password hashes. It takes the handshake file and the network name as input and performs the password cracking.

CloudCracker has a massive password dictionary, giving it a high probability of cracking weak passwords.

The price of cracking a hash depends on the desired priority. Pyrit is a tool for performing brute-force password guessing attacks against IEEE It supports the creation of massive pre-computed rainbow tables of passwords stored in databases. It accomplishes this through a downloaad of different attacks including exploitation of vulnerable protocols, phishing attacks, brute-force and dictionary-based password guessing attacks.

Fern is available for Windows, Linux and macOS platforms. It operated under a freemium model, where a license is necessary to gain access to the full suite of features. Airgeddon is a script designed to run other network monitoring and cracking scripts. For example, Airgeddon requires Aircrack-ng to run.

Fern Wifi Cracker is a Wireless security auditing and attack software program written using the Python Programming Language and the Python Qt GUI library, the program is able to crack and recover WEP/WPA/WPS keys and also run other network based attacks on wireless or ethernet based networks. (YOU CAN USE YOUR CUSTOM MADE WORDLIST OR ANY. Oct 20,  · Fern wifi cracker is effective for wep attacks and wpa bruteforce. Wps enablednetworks can not be cracked on fern wifi cracker. 9) Select thenetwork that you want to hack and click on browse and select the wordlist. Sep 01,  · Fern Wi-fi Cracker can crack WEP, WPA, and WPA2 secured wireless networks. biryaniart.co is the wordlist that comes with the Fern program, but any wordlist you download or have created on your own can be used by hitting the Browse button and pointing Fern to the alternative wordlist file. Using a common dictionary word for a WPA or WPA2.

By configuring and executing these scripts for the user, Airgeddon can make Wi-Fi cracking easier to perform. Many Wi-Fi networks use secure encryption protocols, making them more difficult to attack. Tools like Wifiphisher attempt to steal user credentials via phishing attacks. After gaining access to a wireless network, a penetration tester needs to perform network sniffing and traffic analysis to take advantage of that visibility.

A couple of different options exist for monitoring and dissecting the traffic flowing over wireless networks. Wireshark is the most popular network traffic analysis tool in existence. Its wide array of built-in protocol decoders make it easy to dissect and examine packets from all types of network traffic. Wireshark can be run on packet capture files or perform live traffic capture, including wireless traffic.

Wireshark is designed to be an intuitive and easy-to-use worvlist, but it is designed for network traffic analysis. This means that, while the ferb may be easy to use and invaluable for wireless hacking, an understanding of network fundamentals is necessary to use it effectively. OmniPeek is a commercial network packet analyzer designed for the Windows platform. It offers a variety of visualizations and graphs to help in understanding the traffic present on the network.

While it still requires an understanding of network protocols to use effectively, it provides an alternative to Wireshark for network analysis.

Therefore, we recommend that you do not use this program on unauthorized networks. In the continuation of this article, join us to teach you how to install Fern Wifi Cracker on Ubuntu In this section, we want to install How to Install Cracker on Ubuntu To do this, you must follow the steps below in order. In the first step, you must execute the following commands. 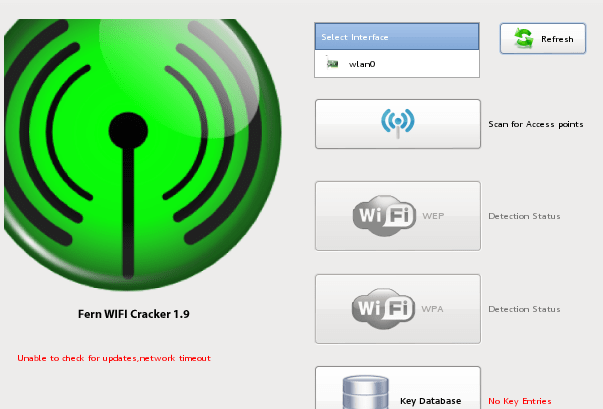 After you have successfully installed the Fern wifi cracker, you should vracker open it in admin permissions. To do this, you must run the following command in the terminal:. The important point is that by placing Sudo at the beginning of the command, we try to run the Fern wifi Cracker as root and in the admin interface. You will be asked for a password by entering the above command.